As the twentieth century progressed, the portrait became increasingly sidelined when not directly condemned.

It was said that in the age of photography it would be an anachronism to continue painting oil portraits, and that the new tendencies in art were taking different paths.

What they didn’t take into account was the fact that even Pablo Picasso had made some great cubist portraits of Ambroise Vollard (1909-10) and Daniel H. Kahnweiler (1910), or that Salvador Dalí, among the surrealists would not sniff at commissioned portraits, but given his enormous fame, nobody argued against him making them in his own way, like the one of Dorothy Spreckels (1942, Fine Arts Museum of San Francisco), among many others, although in some of them surrealism and flattery towards the sitter were not in conflict.

As a young man, one of the totems of local Avant-gardism, Antoni Tàpies, made some almost hyperrealist portraits, such as that of Pere Mir Martorell (1950, Barcelona, Cercle del Liceu), but with the same concept he also painted people in his closest circles – works which he would end up rejecting.

Many believe that all these painters are comparable and are accused of having an unrealistic hankering for the past.

But whatever the case, sometimes people looked for alternatives to academicism when commissioning a serious portrait. This role was often assumed in Spain by Álvaro Delgado, with his respectfully expressionist figures. In Catalonia there was an extensive catalogue of specialists for portrait paintings destined for the galleries of government offices or chairs of local corporations of all kinds, both public and private. Armand Miravalls Bové was one of the best, since he combined his craft with a certain seriousness, often illuminating the background diagonally. Several rectors of the University of Barcelona had their portraits painted by him. José Bascones also had a great presence in this speciality, and the Andalusian who spent some years in Catalonia, Félix Revello de Toro, was possible the artist who received most commissions from the higher echelons of the social scale, including royalty. But the best of all has to be Joaquim Torrents Lladó, a Catalan trained alongside Nolasc Valls, like Tàpies, who was based in Mallorca and had an international clientele of very high social standing.

Many believe that all these painters are comparable and are accused of having an unrealistic hankering for the past. But within that hankering there are also different levels. One thing is the stiff portraiture produced by some and another is the agile fluidity of the like of Torrents Lladó, who died in his forties, who was a nostalgic in the style of Sargent or Boldini, when, granted, it wasn’t “done”, but he executed his works with an extraordinary subtlety that few of his contemporaries we able to achieve.

Sometimes a well-known painter from outside the field of portraiture would be contacted to paint a personality almost through obligation, such is the case of Julián Grau Santos who painted the rector of the University of Barcelona Santiago Alcobé with his own particular vibrant and colourful style. It is a very similar situation to the portrait commissioned to Montserrat Gudiol (1986) of the Minister for Health and Consumer Affairs Ernest Lluch in her own particular ethereal and delicate style. On the internet, through the Sala Gaspar, you can see the Spanish Government’s criticism of the Senate about the cost of the portrait which was one and a half million pesetas. It was not the first time the artist had made portraits of this kind, such as the paintings of Dr. Corominas Pedemonte (1969, Acadèmia de Medicina) and the sculptor Frederic Marès (1980, Acadèmia de Sant Jordi). 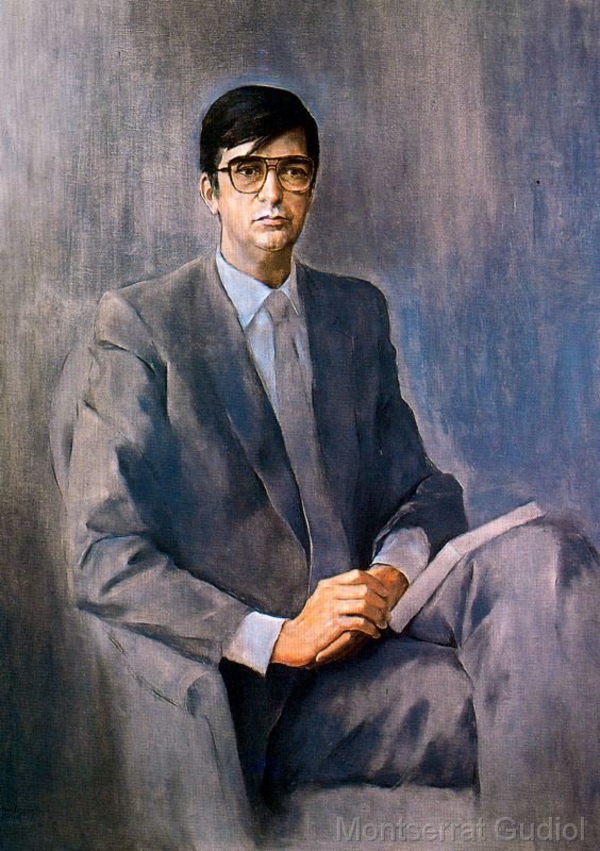 More recently portrait galleries have often been substituted for photographic galleries. One example is the gallery of rectors of the UAB which contains several portraits by Miquel Quilez Bach, a painter who was also a dean of the University of Barcelona, in the Faculty of Fine Art. Some of these portraits break with the custom of the vertical portrait to present them in a landscape format.

Many other painters undoubtedly worked intensively in this genre, which was very lucrative, in which the painter generally did not want to explore anything new and the client had no interest in this approach either.  Normally the portraits were dark, the subject seated, the image was a three-quarter view of the subject looking directly at the painter with something in their hands which demonstrated more or less their profession or most characteristic aspect. The more they resembled previous models the better for everyone. The day will come when this genre with all its special traits and limitations will be studied, by us, broadly, after having made drawn up the biggest possible census of the works. The conclusions will certainly be enlightening.