Digital Invasion of the Museums

Michael is a young American who is travelling to Naples to recover the memories of his recently departed father, since he will no longer have any relation with him in life. His father works for the National Archaeological Museum in the city and to try to understand the person he knew very little about, Michael visits the museum on each day of his trip.

And from there, and through some of the objects exhibited, on a journey that also visits the past of Pompei, Ancient Egypt and the golden age of the Neapolitan Baroque, Michael is able to make peace with his father. This is the storyline of the videogame Father and Son, launched in 2017 for Naples museum, open to everyone and which, just one and a half years after its release already had over three million downloads. 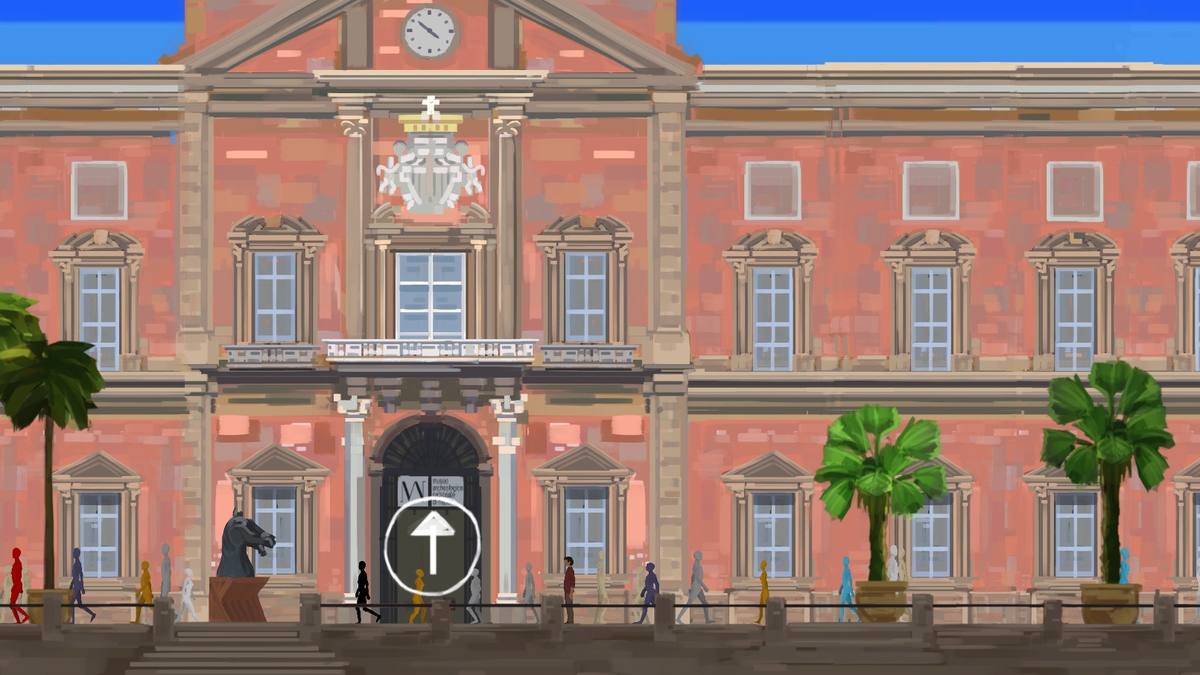 An app-based video game like Father and Son, for all audiences and very intuitive, has enabled the National Archaeological Museum in Naples to gain an international public. Probably most of the people who have played Father and Son will never set foot in the museum but at least they will know a little bit about and take an interest in its extraordinary collections. Yet according to the museum there are those who have visited it on the grounds of the game alone. Also, some of the puzzles in the game can only be solved from within the museum, using a GPS.

Gamification is just one way of applying new digital technology to the museum and heritage sector. These tools have such great possibilities that they have opened up new paths for the diffusion of artistic and monumental heritage, and they have proved a true revolution when it comes to disseminating knowledge in the sector. But where they have been particularly effective is in the difficult task of reaching out to the viewing public.

During the seminar which took place on 7 February at the Episcopal Museum of Vic, organised by the Catalan Agency for Cultural Heritage and entitled Heritage and Digital Technology. Technology and Storytelling for Cultural Communication, some examples of the application of these digital tools in Catalan museums and monuments were presented, providing the key to a great revolution that is affecting the entire employment chain in the sector, from documentation and research to dissemination. It is in this last aspect that the seminar focussed, with examples that are functioning successfully. Albert Sierra, head of new technologies at the Catalan Agency for Cultural Heritage, explained that audiences, at a time when the fact of “looking” is continuous as a result of the multiplicity of screens that surround us every day, “are demanding experiences, not just going to a place and looking at it”. Digital technologies not only make immersive experiences and interactivity with the public possible, but they also facilitate the most detailed recreation of the stories that the institutions want to tell, adding information which perhaps was more difficult to introduce in the past.  A clear example which has been operating since 2013 is the video mapping projected on the apse of the church of Sant Climent de Taüll, which is a faithful projection of the original paintings conserved in the National Museum of Art of Catalonia in Barcelona, but which also represent what the complete works would have been like by incorporating the missing parts. A similar example is the virtual recreation made of the Romanesque cathedral in Vic or the immersive visit to the Royal Monastery of Vallbona de les Moges, centred on the story of the female religious community there. 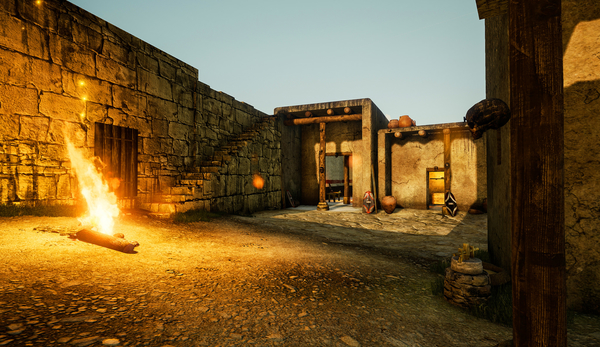 The iberian city of Ullastret in 3D.

As Albert Sierra told us, new technologies allow “journeys through time and space”, through virtual reality, for example.  In the archaeological site at Ullastret there is an immersive video room which recreated the Iberian city in 3D, and at Empuries you can also “visit” the Roman city’s forum in virtual reality. Immersive experiences are ideal for disseminating archaeological heritage and can also be applied to painting with the more conventional techniques of spectacle art which have been used in recent exhibitions with the projection of artworks in spaces such as L’Atelier des Lumieres in Paris to with exhibits of the works of Klimt and Von Gogh. In the latter case there have been different version of these visual spectacles (a term which seems more appropriate to me than exhibitions) one of which will shortly be arriving in Barcelona. 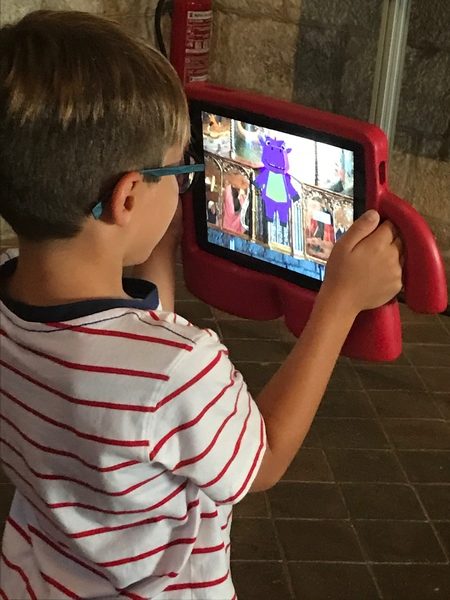 Juguem a fet i amagar (Let’s Play Hide and Seek)

Augmented reality also allows experiences that increase the knowledge of the exhibitions and can offer gamified museum visits. One example, also present in the seminar at Vic, is the game Juguem a fet i amagar (Let’s Play Hide and Seek), aimed at children aged 8 to 12 at the Museum of Girona. The children use a tablet for the visit and through an augmented reality application the Lioness of Girona invites them to discover a whole series of animals hidden around the museum, and to learn about them while they are at it.

Audio dialogues are also changing a giant’s pace. The recently opened Mas Miró in Montroig del Camp offers a visit to The Emotional Landscape of Miró with an audio guide that uses a card linked to mobile devices which allows the user to plan their own route. Visitors van also record, increase or continue the story following their physical visit to the farmhouse using their mobile or any other device with direct links to the the information. The audio guide offers information to the visitors of Mas Miró that help to improve their experience.

The possibilities to disseminate knowledge by museums and cultural institutions now seems infinite.

The possibilities offered by new digital technologies to disseminate knowledge by museums and cultural institutions now seems infinite. An app such as Second Canvas, for example, allows virtual tours around museum collections with an extraordinary visual quality, showing details that are almost invisible to the naked eye thanks to super high-resolution photographs. This is a way of admiring the works in the museum, whether you are planning a physical visit or not. It can be used as a callout, guide or as complementary information once the visit is over. In Catalonia, four museums are using the digital platform in different ways: the National Museum of Art of Catalonia with a tour of the subject of the portrait; the Museum of Empordà, with masterpieces; the Episcopal Museum of Vic as an interactive resources for the temporary Oliba Episcopus exhibition; and the Museum of Girona which is currently preparing material for its exhibition of some of its medieval altarpieces. 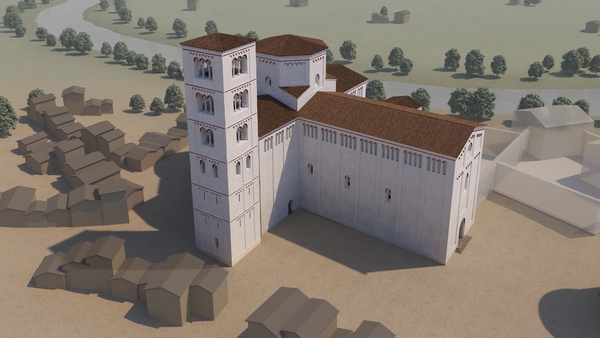 Reconstruction hypothesis of the Vic cathedral.

It is clear that this country, where the cultural sector is in a financially precarious position, is still a long way from the spectacular proposals which are being offered in other countries, especially in English-speaking nations which have had it much clearer for a long time now that having a good digital department in the museum is crucial. Digitalisation of the dissemination of museum collection is changing the relationship that the institution has with its public. Museums are active agents but so are their visitors. For example, in the Cooper Hewitt Design Museum in New York visitors are offer The Pen on arrival. They can use this device to point to different objects exhibited which interest them during the visit. When they leave the content is downloaded and they can take it home with them, with all the information about the chosen pieces. It is their own personalised catalogue to take away.

The biggest dilemma in all of this change is how to explain museums through these new tools without ‘dumbing down’. Gamifying, teaching, fine. But the principal objective of the museum should never be taken away: the conservation of works and the creation and dissemination of knowledge. “Without quality research it is impossible to produce a quality product”, said Albert Sierra in the Vic seminar. This is an objective that we need to always bear in mind.