Outside it is a bright sunny Saturday, but we are immersed within the darkness of the Barcelona CaixaForum hall watching a video installation of Turbulent, by the Iranian artist Shirin Neshat, which forms part of the Poetics of Emotion exhibition.

On one screen there is a singer performing a traditional Sufi song before a male audience. When the singer finishes attention is directed to another screen on which a woman dressed in black, the singer Sussan Deyhim gives an incredible performance in an empty auditorium. This is a protest against the situation of women in Iran, where they are not allowed to sing in public or record their performances, explains the guide of the microvisit. The silence of the group is moving. The emotion of the magnificent piece performed by Neshat has undoubtedly touched the group, which probably joined the visit spontaneously. 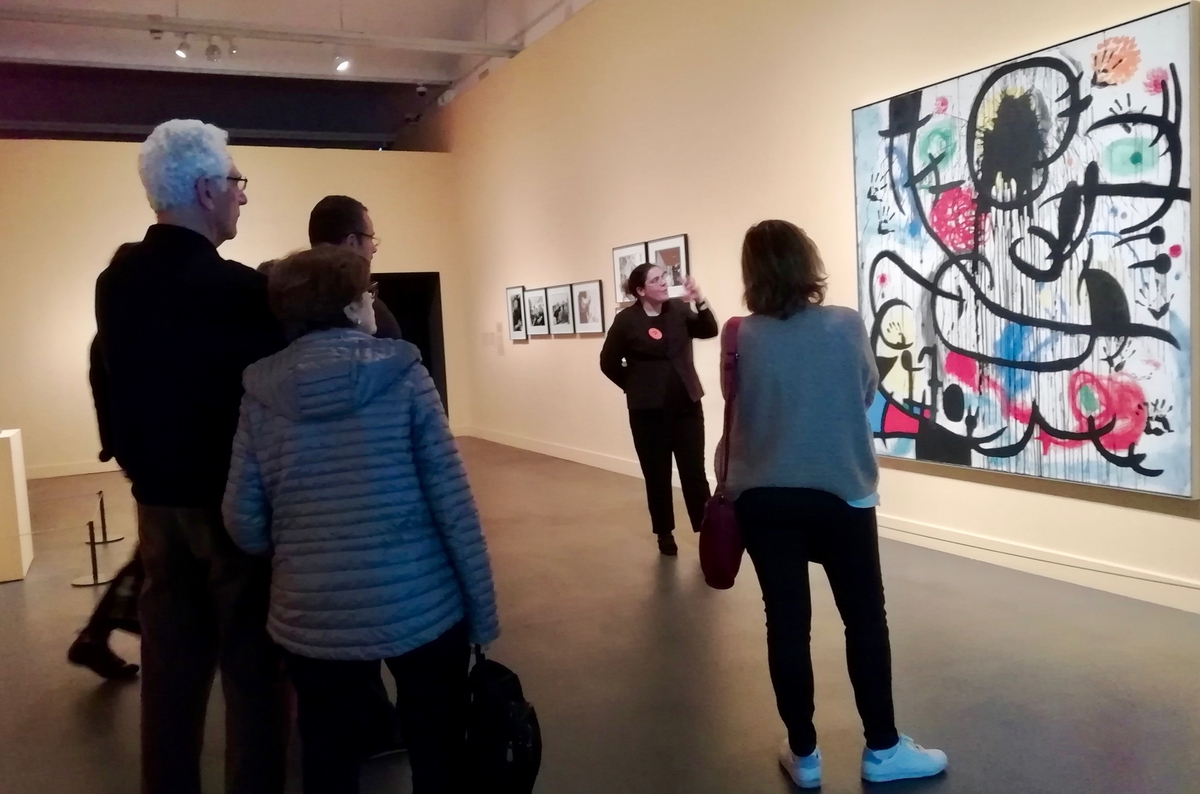 Microvisit to the exhibition Poetics of Emotion. Photo: Montse Frisach.

The microvisits to the exhibition Poetics of Emotion, offered every weekend by the CaixaForum, are a simple and easy way to approach contemporary art  and discover in detail many of the pieces in the exhibition at no extra cost and without having to make a reservation. Poetics of Emotion curated by Érika Goyarrola, is an exhibit in which works from all periods are in dialogue to show how the many different emotions in the history of art have been represented. The exhibition speaks for itself, without cryptic messages, but the mediation offered by microvisits of just 20 minutes gives the weekend visitors new ideas about the works.

At the start of the tour the guide, Cèlia Prats, dressed in black and with a badge showing a question mark, makes it quite clear that she is open to questions and hopes that the audience of the microvisit will come away better-informed.  The start of the visit is announced on the loudspeakers of the CaixaForum. The first to sign up are a father and his ten-year-old daughter, who watch attentively throughout the visit. Then a couple joins the group and are later joined by more visitors.

“What is an emotion?”, Cèlia asks to break the ice.

The start of the exhibition is clear enough in explaining that art has always been interested in the strength of emotion in human beings. “What is an emotion?”, Célia asks to break the ice. Three extraordinary works express pain and sadness, almost in the same way, despite being from different periods: the Gothic Weepers: a fragment of the calvary with six characters, from the end of the fifteenth century; and the video The Silent Sea (2002), by Bill Viola. Human beings have not changed and neither has their expression of pain. The visit continues with the video I am too sad to tell you (1971), with a close-up of the artist Bas Jan Ader crying. In the next room, the visitors are especially intrigued by the photographs, which look like drawings, of solitude in the landscape of Carla Andrade and are surprised when the guide tells them that the two blackened bronze relief by Günther Förg each weigh half a tonne, meaning that the wall had to be reinforced in order to hand them. The microvisit concludes with an oil by Miró, photos by  Colita and the video Birthday, by Ivan Argote, which speak more of celebration and happiness in different contexts. 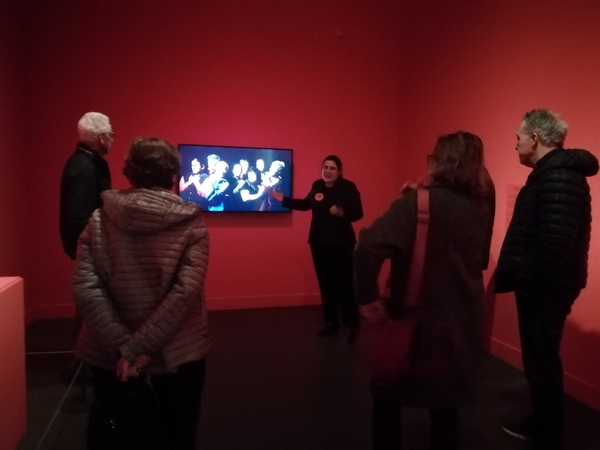 These microvisits are different every time, since the guides adapt them to the profiles of the visitors and the question that they ask. On this particular occasion there were not many questions. The guide tells us that “Other groups are more talkative and so, depending on the dialogue the topic of conversation changes”. The visits are also adapted when there are children in the group. For example, Cèlia passed quickly by the works of Gina Pane, which show some harsh images of self-harm by the artist in an action against everyday violence.

The guide stays in the exhibition rooms to answer questions from the visitors and waits for the next session. On leaving the room where Shirin Neshat’s pieces were exhibited, two women are sorry that they realise the visit had already begun but they stay for the next one so that they can enjoy the full tour.

Microvisits to the exhibition Poetics of Emotion. CaixaForum Barcelona: Saturdays from 4pm to 8pm. Sundays and Public holidays from 11am to 2pm and 4pm to 8pm. Until 19 May.