The Case of Saul Leiter

I came across the work of Saul Leiter (Pittsburgh, 1923-Nova York, 2013) in a bookshop in Berlin in 2012. So, rather late as is often the case with so many lovers of photography who knew little or nothing of this incredible photographer until years or even months before his death. In my case it was thanks to three postcards and a book which I had bought, although the book which brought Leiter back from a long period of anonymity and launched him onto the international stage was a different one, now out of print: Early Color, published by Steidl in 2006.

On the postcard – seen in the photo – entitled Taxi, New York, 1957 you could only see a hand, two half-silhouettes travelling in a yellow and red New York taxi and a blurred area towards the bottom of the shot, seemingly insignificant, but which anyone who knows anything about abstract painting would describe as a field of shadow and colour, with photographic textures. What is expressed in that empty section is, for me, much more than that, maybe because reality also includes anodyne or apparently unimportant zones which can also be used to frame image and highlight more intense appearances, just like what happens with memory. So, this image seemed in a kind of revealing and realistically photographic way to be like life itself –and the memory of life- where places offer incomplete, neutral or fleeting elements at the same time as elements, figures or fragments that are memorable. 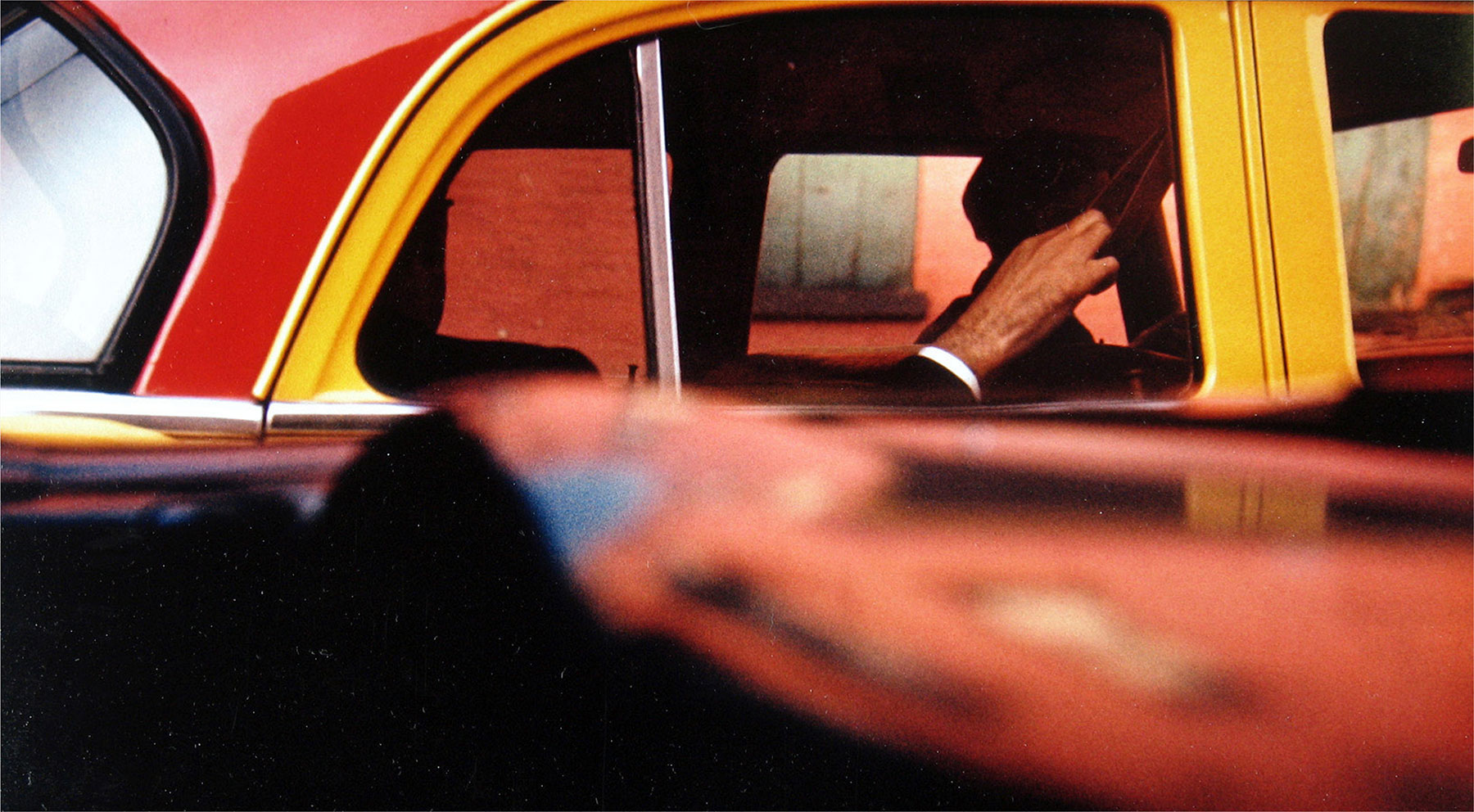 Taxi, New York, 1957 was a realist image, but it was also a metarealist and somewhat abstract image. It was also a pretty pictorial image, but one which was radically photographic. In fact, like most of Leiter’s work, it managed to partially evoke and express the photographic act, its production –with intentional distortions – while producing the image of that act in itself. That kind of synthesis of the representation and reflection on the very means of expression seems to me basic in different art forms, and especially in photography and cinema. It is a line of work that I have personally explored in my own photographic and cinematographic work from 1977 until now, and it can be seen in the experimental cinema of Michael Snow and in the work of contemporary photographers such Manel Esclusa, Manuel Serra, Mariano Zuzunaga , Joan Fontcuberta, Alejandro Marote, Jordi Guillumet and Mònica Roselló, to name but a few leading artists on the Catalan and Spanish scene. 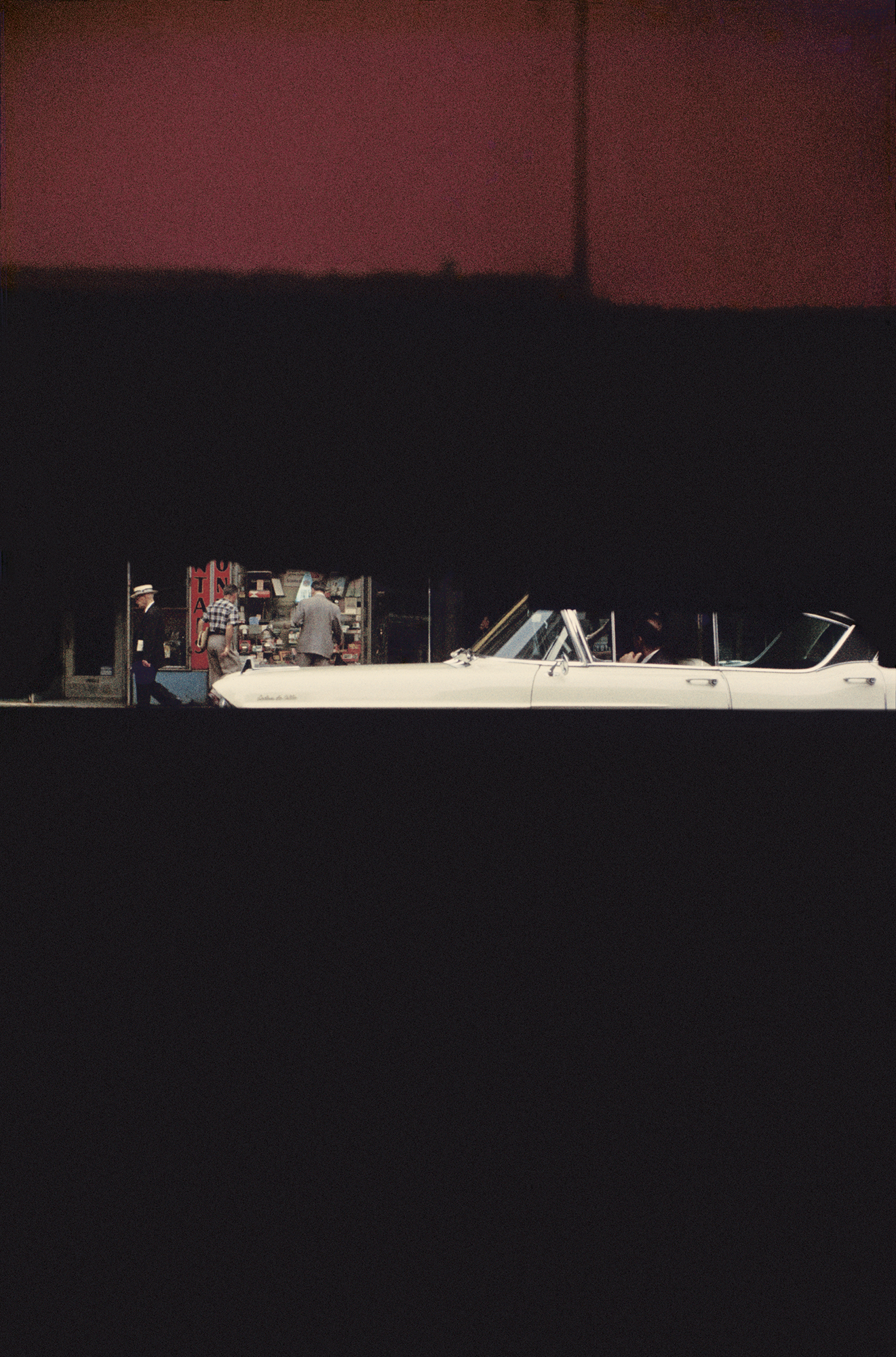 The other postcards and, in particular, many of Leiter’s photographs published in the Photofile book published by Thames & Hudson confirmed to me that this unknown author was an exceptional photographer and a pioneer in one aspect especially: the conscious and perfectly judged use of colour as an element of expression. Photographic colour, with its special texture, is different and no less suggestive than the colour in painting.

Photographs such as Green Light, c. 1955, Through Boards, c. 1957, Canopy, c. 1958 and Harlem, 1960 make me think that sometimes photography is capable of achieving and surpassing the greatest successes of other arts considered more prestigious. I would love to know what the pioneers of modern collage (Georges Braque, Pablo Picasso, Kurt Schwitters) would have thought if they had known and taken notice of this kind of “ready-made collages” that Leiter was able to achieve in his photographs. On the other hand, some of his images anticipated the arrival of American pop art. The difference is that Warhol was in the art market from the beginning and Leiter was not.

A long period of oblivion and a late revival
Two incredible presentations of Leiter’s work have coincided this year in Barcelona: the exhibition Saul Leiter. In Search of Beauty, in Foto Colectania from 21 October 2018, and the publication of the book All about Saul Leiter by RM. Both of them offer the opportunity for many reflections and in this text, I will outline a few of them.

First is the question of the incredibly long period during which he was forgotten – around 4 decades – and his late revival. The main agent responsible for that revival is Margit Erb who had helped the chaotic photographer to organise his extensive work and found him an excellent editor: Steidl. Another of his rescuers is Roger Szmulewicz, the curator of the Foto Colectania exhibition. It is true that Leiter always gave priority to his creation and neglected the promotion of his work. 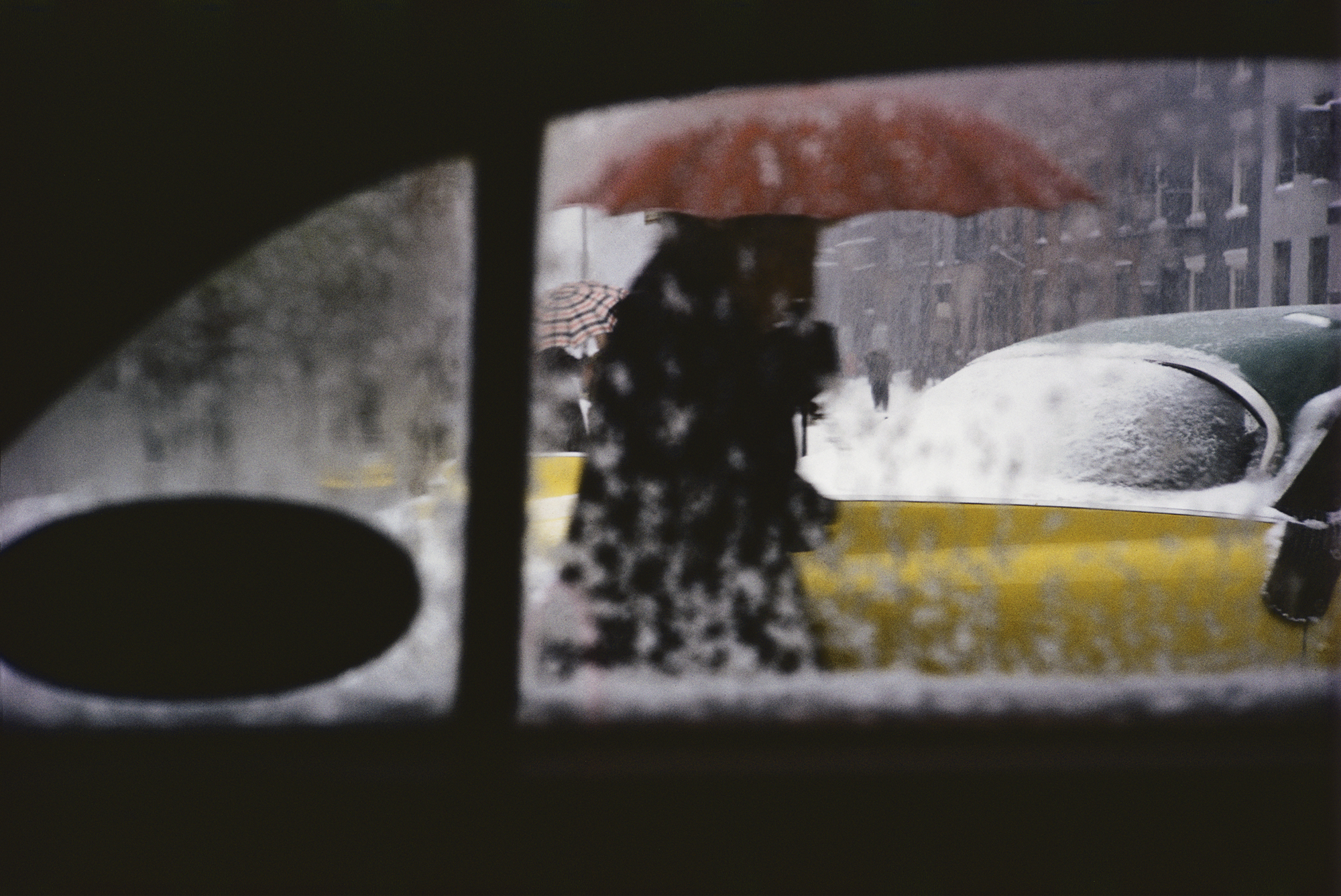 However, we could say a lot about oblivion and revival in photography, but for the moment I will just mention that a true “History of Photography” is a work as yet unwritten. English- and French-speaking historians take note: a little humility is due when it comes to establishing a closed and egocentric canon! If Leiter was ignored for so many decades, and if that could happen to someone who was living in the world capital of art (New York from the mid- twentieth century to the beginning of the twenty-first) and someone who, in the 1950s and 60s, had exhibited at the MoMa and published in Harper’s Bazaar and in Life magazine, how many forgotten and undervalued brilliant photographers are there in countries where neither the market nor the institutions are adequate, like Catalonia, Finland or Peru, which scarcely make an appearance in their respective and influential history books.

Between 1948 and the mid-1960s Leiter “made slides” (in colour) – just like the Kodachrome slides being produced by thousands of amateur photographers. In the 1960s it was considered that photographic art had to be in black and white, and only in black and white. This prejudice which was enforced by the powers that be stated confirmed that this was the case and that photographs in colour were for postcards and family albums. The sort that Paul Simon sang about.

Personally, I think that colour could not have been a fully manipulable expressive element until the advent of digital photography. However, I do agree with Leiter in that the possibilities of photographic colour were and are magnificent. I even think that it could be more difficult – and therefore a more interesting challenge – to take good photos in colour than in black and white. The big mistake for many photographers is that they were not able to achieve the level of their work in black and white when they used colour. They used the same expressive consciousness as they had in their previous work. 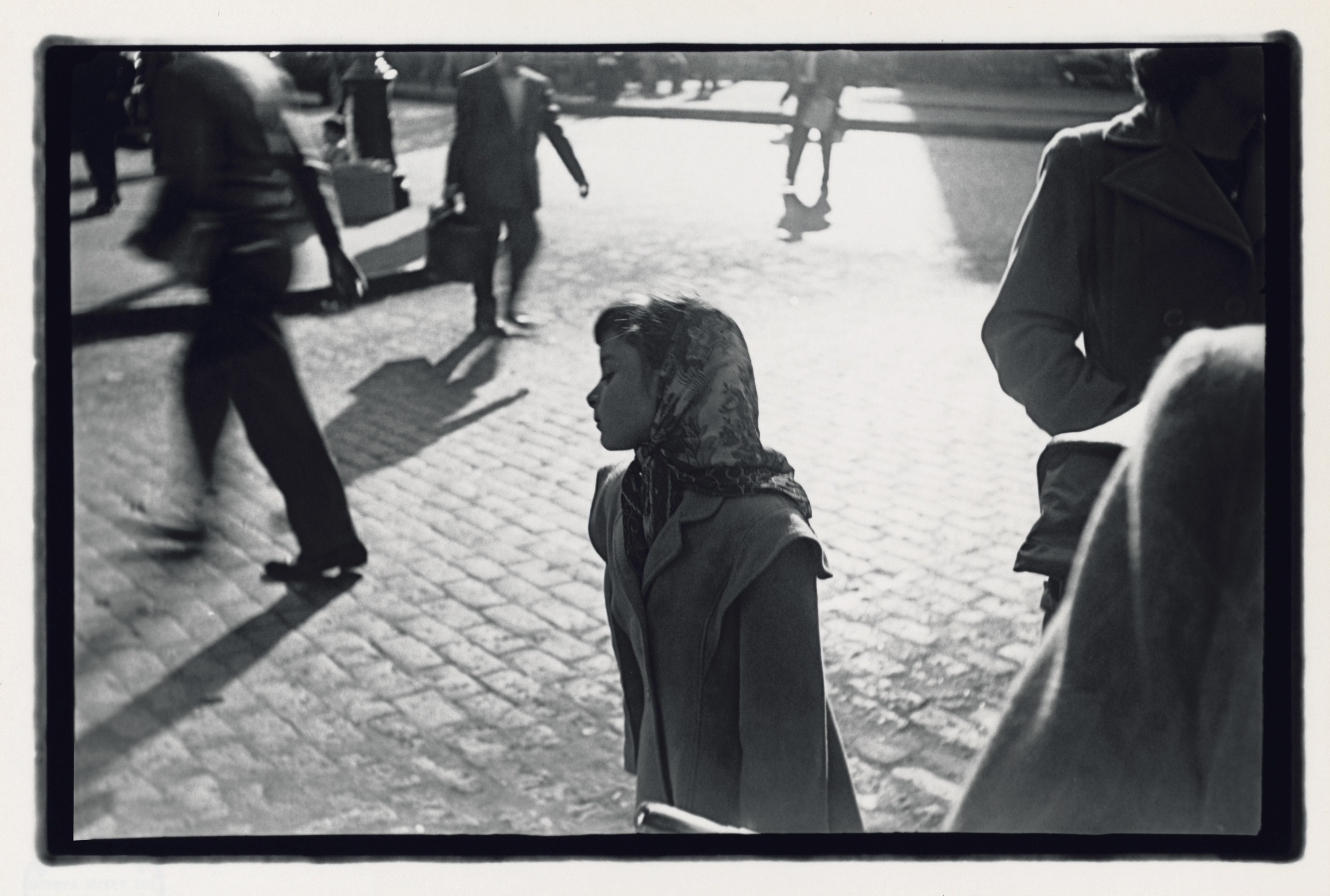 Leiter’s black and white photographs sometimes look like those from the “street photography” genre – a specifically photographic genre – which best represented his photographs in colour. And at different times they seem to go beyond other genres: portrait, female nude, fashion photography. But most of his best and more personal works are in colour, since it is only colour that allows him to achieve the best possible synthesis of pictorial composition and photographic expression.

Saul Leiter’s colour photography makes me think of a statement by Danish film director Carl Th. Dreyer, who having filmed all his work in black and white said in an interview that he had no doubt that if one day he could make a film in colour, it would be he and not chance that chose and applied the colours. Leiter was possibly the first photographer to have a full awareness and understanding of the breadth and depth of expressive possibilities of colour photography and to know how to use them. He chose his colours like a painter or like a composer choosing his notes. In fact, I believe that photography and music have a profound but little studied relationship.

I think the photography of Saul Leiter – who was also a painter and a friend of the expressionist and abstract painters – represents a kind of photographic ideal that is free of the two main vices of this means of expression and communication. It does not limit itself merely to an objective photographic document (like a robot) but neither does it fall into the pretentious and self-conscious imitation of other arts considered to be more noble or admirable, such as painting. The mistake of pictorialist photography was to limit itself to imitating painting using superficial aesthetic means. First impression and later other styles and means including those of conceptual art. Leiter, on the other hand, managed to compose and produce images that were as good as the best paintings but expressed using specifically photographic means: focus, out of focus, depth of field, colour density, greater or lesser exposure, grainy film, etc.

Mystery around the corner (or the image as a fragment)
Saul Leiter made the largest and the best part of his work without having to leave his adopted city New York. To take his street photographs he didn’t have to go much further than four blocks from his neighbourhood in East Village. There was the odd trip to Harlem. Leiter said, “I think that mysterious things happen in familiar places” and that “We don’t always need to run to the other end of the world”. His way of seeing things and his focus enabled him to find and feel the mystery in his own daily space, whether rounding the corner or in the reflection of a window, in images which reveal a certain distortion in the transparency and reminding us that the act of seeing takes place through the elements that filter our perception: the glass or the fabric of an awning in the same way as the eye and the eyelid, and the lens and aperture of a camera. 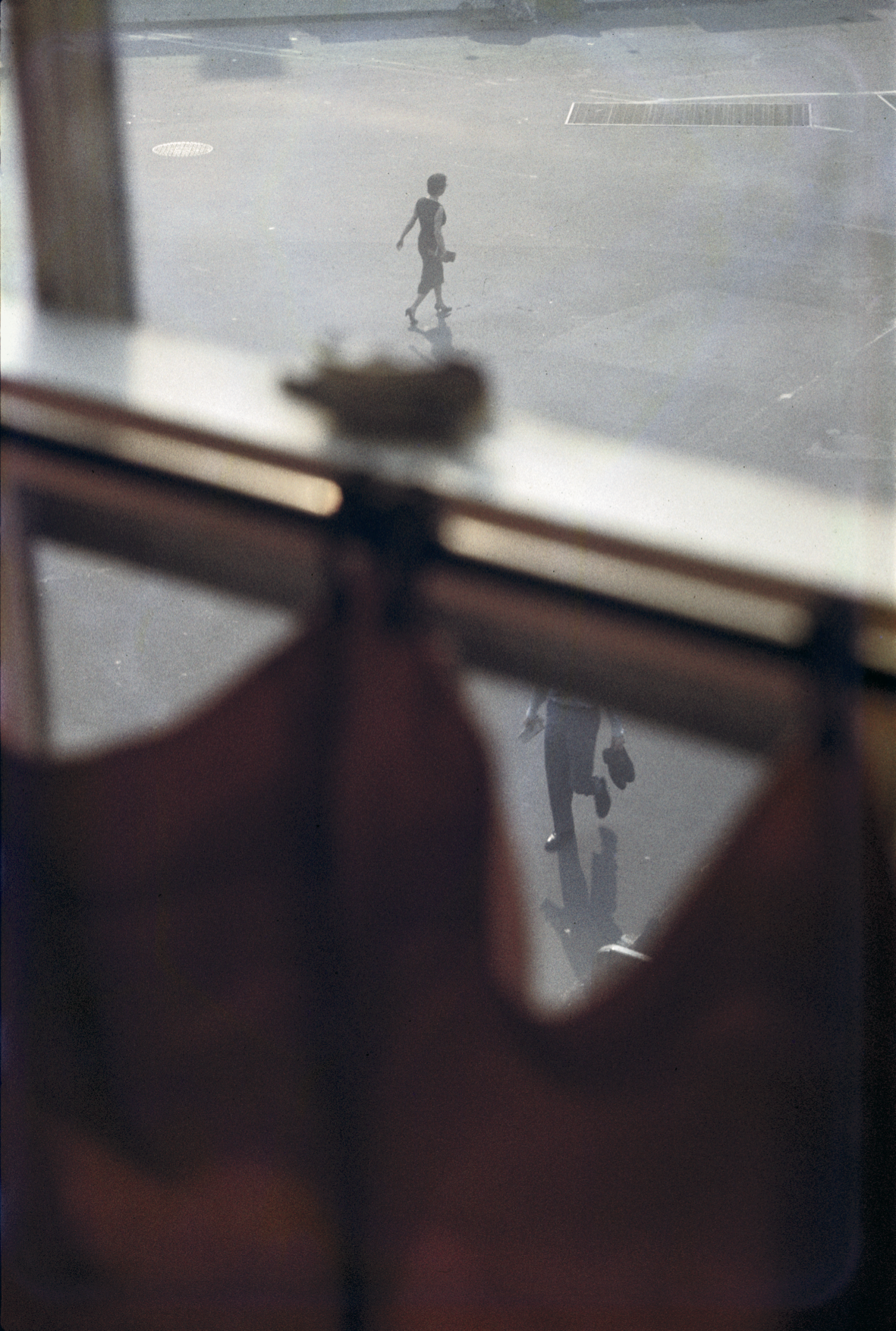 He often managed to express this metarealist displacement towards an uncertain, suggestive or mysterious view through a fragmentation of the image, with sub-framings within the main frame or even by just showing half faces or silhouettes of people, making them as anonymous as they were memorable like the drawings of Guillem Cifré.

This fragmentary way of seeing and representing things can be seen as a spatial equivalent of those who use photography to capture a moment in time. The temporal equivalent of the fragments of places and figures that Leiter photographed would be the rear-lit image of a fleeting moment.

The significance and the sense of Leiter’s work, and above all that of his street photography from 1948 to 1960, which begin with and then transcend life as it is, can be considered a rare synthesis able to combine and fuse views of reality which are supposedly very different, but which are in fact complementary. His work is realist and abstract at the same time, expressionist and pop, metarealist and, finally, profoundly baroque in the sense that he reminds us that we can only know reality through signs and fragments. The same signs and fragments that Leiter was able to discover, capture and represent in his work in a radically photographic way.